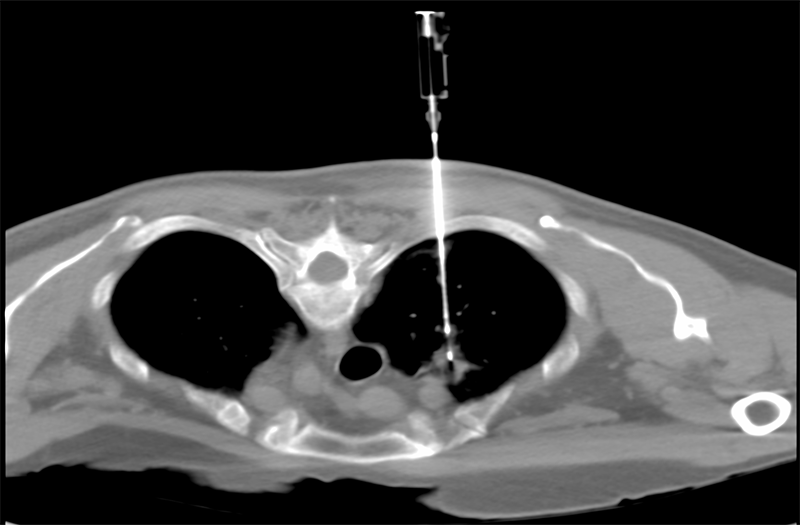 The following are types of biopsies:

1. Bone : A bone biopsy is a procedure in which bone samples are removed to find out if cancer or infection or other abnormal cells are present. A bone biopsy involves the outer layers of bone, unlike a bone marrow biopsy, which involves the innermost part of the bone. Bone biopsy should as rule be done after all necessary imagings performed. Jamshidi needle has replaced the open-biopsy and fine-needle aspiration

3. Gastrointestinal Tract : Flexible endoscopy enables access to the upper and lower gastrointestinal tract, such that biopsy of the esophagus, stomach and duodenum via the mouth and the rectum, colon and terminal ileum are commonplace. A variety of biopsy instruments, such as the bioptome, may be introduced through the endoscope and the visualized site biopsied.[15] Until recently, the majority of the small intestine could not be visualized for biopsy. The double-balloon “push-pull” technique allows visualization and biopsy of the entire gastrointestinal tract.
Needle core biopsies or aspirates of the pancreas may be made through the duodenum or stomach.

4. Lung : Biopsies of the lung can be performed in a variety of ways depending on the location.

5. Liver : In hepatitis, most biopsies are not used for diagnosis, which generally occurs by other means. Rather, it is used to determine response to therapy which can be assessed by reduction of inflammation and progression of disease by the degree of fibrosis or, ultimately, cirrhosis.
In the case of Wilson's disease, clinicians use biopsies to determine the quantitative copper level. 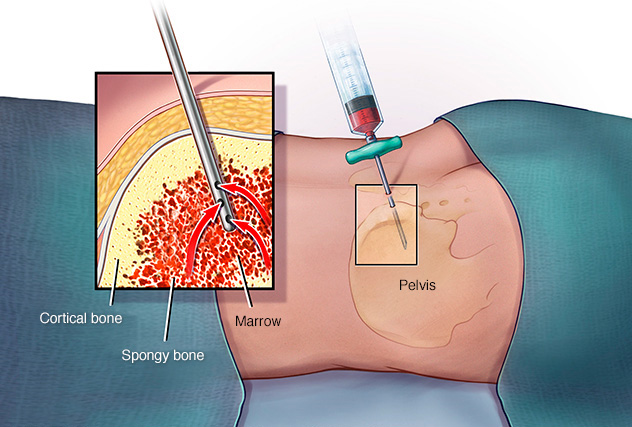 Your doctor may recommend a bone marrow biopsy if an abnormality is detected in your blood or if your doctor suspects cancer has originated in or traveled to your bone marrow.

Bone marrow is the spongy material inside some of your larger bones where blood cells are produced. Analyzing a sample of bone marrow may reveal what's causing your blood problem.

Bone marrow biopsy is commonly used to diagnose a variety of blood problems — both noncancerous and cancerous — including blood cancers, such as leukemia, lymphoma and multiple myeloma. A bone marrow biopsy may also detect cancers that started elsewhere and traveled to the bone marrow. 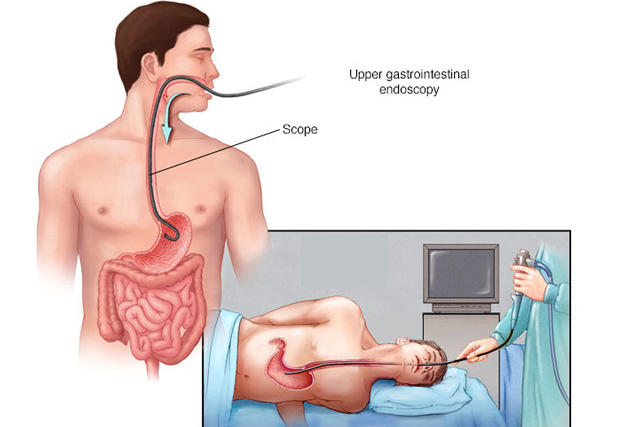 During endoscopy, your doctor uses a thin, flexible tube (endoscope) with a light on the end to see structures inside your body. Special tools are passed through the tube to take a small sample of tissue to be analyzed.

Depending on the type of endoscopic biopsy you undergo, you may receive a sedative or anesthetic before the procedure. 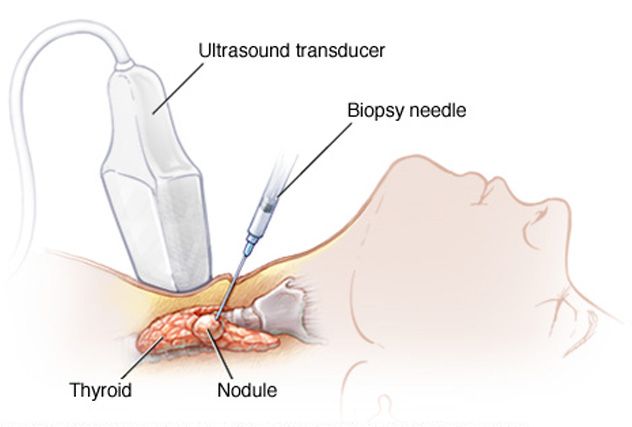 During a needle biopsy, your doctor uses a special needle to extract cells from a suspicious area.

A needle biopsy is often used on tumors that your doctor can feel through your skin, such as suspicious breast lumps and enlarged lymph nodes. When combined with an imaging procedure, such as X-ray, needle biopsy can be used to collect cells from a suspicious area that can't be felt through the skin.

• Fine-needle aspiration. During fine-needle aspiration, a long, thin needle is inserted into the suspicious area. A syringe is used to draw out fluid and cells for analysis.
• Core needle biopsy. A larger needle with a cutting tip is used during core needle biopsy to draw a column of tissue out of a suspicious area.
• Vacuum-assisted biopsy. During vacuum-assisted biopsy, a suction device increases the amount of fluid and cells that is extracted through the needle. This can reduce the number of times the needle must be inserted to collect an adequate sample.
• Image-guided biopsy. Image-guided biopsy combines an imaging procedure — such as X-ray, computerized tomography (CT), magnetic resonance imaging (MRI) or ultrasound — with a needle biopsy.

Image-guided biopsy allows your doctor to access suspicious areas that can't be felt through the skin, such as abnormalities on the liver, lung or prostate. Using real-time images, your doctor can make sure the needle reaches the correct spot.
You'll receive a local anesthetic to numb the area being biopsied in order to minimize the pain. 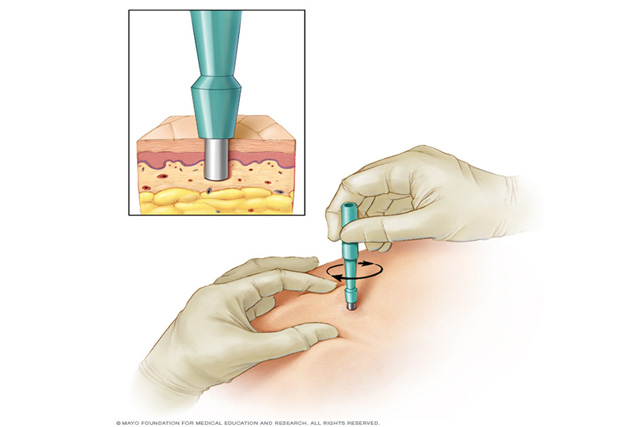 A skin (cutaneous) biopsy removes cells from the surface of your body. A skin biopsy is used most often to diagnose skin conditions, including melanoma and other cancers. What type of skin biopsy you undergo will depend on the type of cancer suspected and the extent of the suspicious cells. Skin biopsy procedures include:

You receive a local anesthetic to numb the biopsy site before the procedure.

If the cells in question can't be accessed with other biopsy procedures or if other biopsy results have been inconclusive, your doctor may recommend a surgical biopsy.

After your doctor obtains a tissue sample, it's sent to a laboratory for analysis. The sample may be chemically treated or frozen and sliced into very thin sections. The sections are placed on glass slides, stained to enhance contrast and studied under a microscope.

A biopsy also helps your doctor determine how aggressive your cancer is — the cancer's grade. The grade is sometimes expressed as a number on a scale of 1 to 4 and is determined by how cancer cells look under the microscope.

Low-grade (grade 1) cancers are generally the least aggressive and high-grade (grade 4) cancers are generally the most aggressive. This information may help guide treatment options. Other special tests on the cancer cells also can help to guide treatment choices. In certain cases, such as during surgery, a pathologist examines the sample of cells immediately and results are available to your surgeon within minutes. But in most cases, the results of your biopsy are available in a few days. Some samples may need more time to be analyzed. Ask your doctor how long to expect to wait for your biopsy results.

In an open or closed biopsy that requires surgery, you will be given anesthesia to help with the pain. When you receive the local anesthetic to numb the skin, you will feel a slight pin prick from the needle. You may feel some pressure when the biopsy needle is inserted. The area will become numb within a short time.

What happens at a biopsy?

A biopsy is a sample of tissue taken from the body in order to examine it more closely. A doctor should recommend a biopsy when an initial test suggests an area of tissue in the body isn't normal. Doctors may call an area of abnormal tissue a lesion, a tumor, or a mass.

How long does it take to perform a biopsy?

How Long Does the Procedure Take? Each sample takes about 10 to 20 seconds to obtain. The whole procedure from start to finish usually takes no more than 10 to 15 minutes. However, please allow an hour for your visit because of registration and possible waiting time in the office.